Barrow Clump was originally a Bronze Age burial mound, but in the 6th Century AD Anglo-Saxons borrowed the site to start burying their own dead at the foot of the mound. This Anglo-Saxon history was not known until badgers started causing damage to the site, meaning it was necessary to excavate as quickly as possible before more damage was caused. The 75 graves found by the team held people of all ages, many of which were accompanied by grave goods including spears, a drinking cup and jewellery. 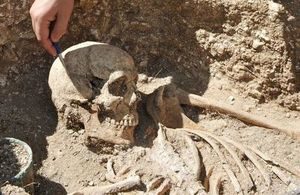 The dig has been nominated in the ‘Best Rescue Dig’ category, which recognises excavations which are necessary as the site is under threat from either natural or human causes. However, the graves’ location on Salisbury Plain Training Area has protected them from further damage which can be caused by modern agricultural methods.