Where did it all begin ?

Op NIGHTINGALE started more than 5 years ago in 2012 and since then has won several national awards for its work. Check out the awards we have won HERE

It all started when a group of army personal were employed to recover archaeological material from Badger Setts at the Chisenbury Midden on Salisbury Plain. This work was supervised by Sgt Diarmaid Walshe and Richard Osgood. Also invited along to view the proceedings was Time Team’s Dr Phil Harding. As the number of projects grew and diversified the creation of the Defence Archaeology Group was naturally developed. The official formation of the Defence Archaeology Group was completed on 28th September 2012 when Dr Phil Harding and Surgeon Commodore Peter Buxton were invited to the cabin of HMS Victory to sign the ‘Visitors Book’ to record the event. 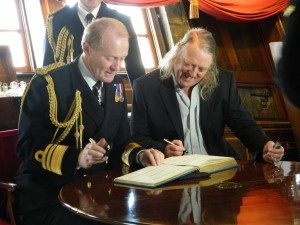 What does the Defence Archaeology Group do ?

The Defence Archaeology Group facilitates Wounded, Injured and Sick servicemen / women from the Armed Forces, along with Reserves and Veterans on Op NIGHTINGALE collaborations. Although independent from the Ministry of Defence, it has well established links with the Defence Infrastructure Organisation (which is the principal archaeology stakeholder for Defence Estates). It has several serving Military personnel, who volunteer and directly support the DAG as Project Co- ord Officers and Enabling Staff. Furthermore, the DAG has unique links and direct support from esteemed Archaeologists whom are well established within the professional and academic environs. The DAG can assist and support individuals to link- up with suitable archaeology projects and equally assist existing archaeology projects find and support military personnel and veterans with involvement in their projects. Although a future aspiration, the DAG currently does not directly support individuals financially, but has the capacity to sign- post them to other charities and assist them through funding processes necessary to enable participation.